Apple's MagSafe Battery Pack is exactly what it says on the tin: a portable battery that snaps to the back of an iPhone through Apple's MagSafe magnetic charging tech and charges the handset wirelessly. The battery is a tougher sell at full price, but today it's available for $71, which marks the lowest price we've seen to date. For reference, Apple typically sells the device for $99, though its average price online has sat closer to $90 in recent months. 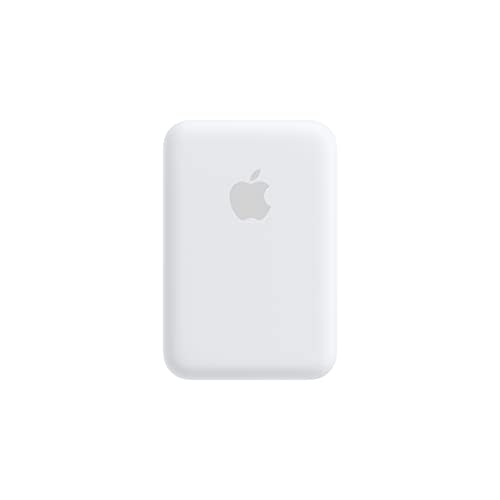 This is a new low price for Apple's wireless charging pack.
$71 at Amazon

The MagSafe Battery Pack works with any iPhone 12, 13, or 14 model, and using it is as simple as slapping it on the back of one of those devices and letting it do its thing. You don't have to press any additional buttons to start the charge, unlike many third-party competitors. Design wise, it's a slim, matte plastic rectangle that's designed to match the dimensions of an iPhone 12 or 13 mini, so it'll fit entirely within the back of a larger device like the iPhone 14 Pro Max.

Because this is an Apple-made product, it's also able to integrate with an iPhone in ways competing MagSafe batteries can not. You can see the pack's charge level through iOS's Control Center and Batteries widget, for instance, and you can reverse-charge the battery itself from your iPhone when the latter is plugged in. By default, the pack will only charge your phone to around 90 percent to better preserve its efficiency, though you can turn that off if you wish.

If you have a 20W or higher charger and a USB-C to Lightning cable, you can also plug in the MagSafe Battery Pack and use it a 15W wireless charging puck, giving the device a bit of utility when you aren't out of the house. Unfortunately, and perhaps expectedly, Apple doesn't include a cable or power brick in the box, but that's less of a problem if you already own both of those for your iPhone. (If you don't, our guide to the best fast chargers may be of interest.)

When it comes to actually charging your iPhone, the MagSafe Battery Pack is a bit more compromised. Part of that is just due to the nature of wireless charging; the tech has improved over the years, but if you want the fastest charge possible, a cable with a traditional battery pack can still be much quicker to top things off. But the capacity of the MagSafe Battery Pack itself is fairly small at 1,460mAh (or 11.13Wh), so it can only charge a standard iPhone 14 to about 60-65 percent from zero.

We've recommended Anker's 622 Magnetic Battery as a good alternative to the MagSafe Battery Pack in the past; that one has a larger 5,000mAh (19.25Wh) capacity that can get closer to an 80-85 percent charge on the same phone. It also costs less than Apple's pack even with the latter on sale, has a built-in kickstand, and comes in a wider variety of colors. (The MagSafe Battery Pack is only available in white.) It's not designed as neatly for iPhones and lacks the extras noted above, but it's a better value if you just want more juice from a compact MagSafe pack. Anker's 633 Magnetic Battery, meanwhile, has an even greater capacity, albeit in a thicker frame.

Still, since their charging abilities are all somewhat limited, MagSafe packs like these are best thought of as battery extenders, things can use to keep your phone going in a pinch, more than full-on power banks. For that, the MagSafe Battery Pack is fine, particularly since Apple released a firmware update earlier this year that boosted the device's wireless charging rate from 5W to 7.5W, which is still slower than an optimal wired connection but matches the Anker models above. If you can live with the lesser capacity and know you'll value some of its more iPhone-friendly features, it should be easier to justify at this deal price.